AIM-ing Towards the CEFR and the Revised Ontario FSL Curriculum 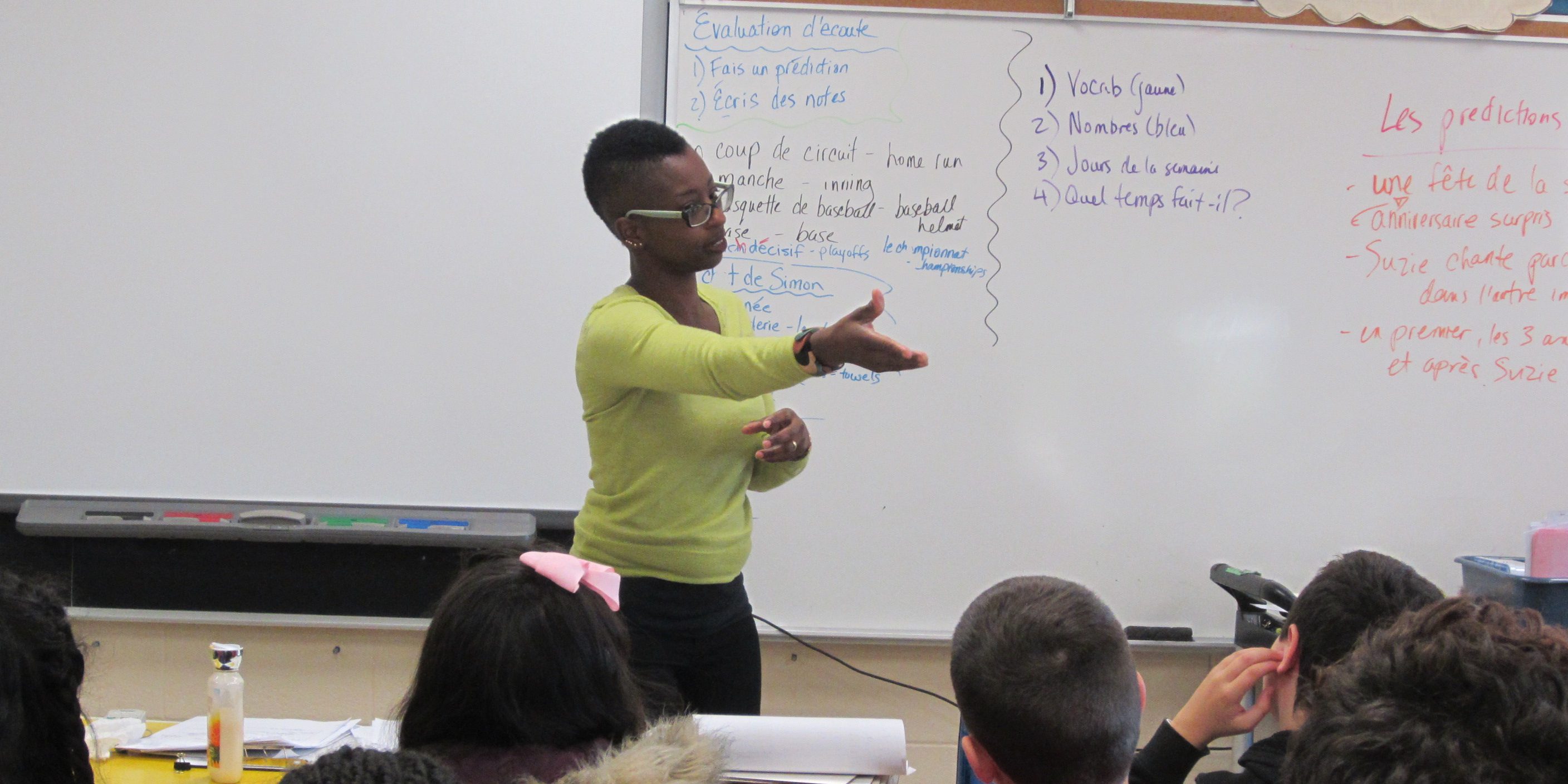 When the revised FSL Curriculum was (finally!) released in Ontario in 2013, I remember pouring through it – both anxious and excited to see the extent to which it was revamped, and how these changes would affect my program as an AIM teacher. The more I read it, the more energized I was about the new focus on authentic communication and interaction in French, cultural awareness, and reflection. I had always felt somewhat constrained and boxed in by the old curriculum. With the revised curriculum, I was able to envision so many possibilities for teaching and learning with my Core French classes. But during that period of uncertainty with the new curriculum, while attending various workshops, meetings and conferences, and reading some FSL teacher forum posts, I would hear/read comments such as “I’m not using AIM anymore. It doesn’t work with the new curriculum.” Depending on the situation, there were times when I would politely bite my tongue, but there were other times when I felt compelled to challenge the statement right then and there.

There came a point where, I hate to admit this, but I found myself starting to doubt whether or not AIM actually integrated with the revised curriculum. I even reached out to some of my very experienced AIM colleagues such as Kimberly Peters, DDSB, who, ironically enough, I ended up co-presenting with on this very topic a year or so later. Once I received reassurance from her, as well as other AIM teachers that AIM *does* actually support the new curriculum, I started to do my own more in-depth research (researching is one of my compulsive habits…some people love to eat chocolate, some love to knit, I love to research!) That’s when I came across the AIM/CEFR document highlights the integration of AIM principles with the expectations of the revised FSL curriculum for each grade. (You may contact AIM Language Learning directly to obtain a copy). That certainly helped to put my mind at ease. As well, I did a lot of research on CEFR (the framework on which the revised curriculum is based), read the numerous “Guides to Reflective Practices for Core French Teachers” by the Ministry of Ontario, and various books that have been recently published that discuss best practices for FSL teachers (e.g., “Let’s Talk: Lifelong Language Learning” by Michael Green, Pamela Marshall Gray, and Sonia C. Remiglo)).

My colleague, Kimberly, and I co-presented the session “AIMing for the New FSL Curriculum” at the Fall OMLTA Conference in Alliston, Ontario a couple of weeks ago. We wanted to start debunking some of the rumours and myths that we’ve heard swirling around about the validity of AIM in the context of CEFR and the revised curriculum. As well, we shared a number of action-oriented tasks and units that we’ve developed based on the plays/readers that we’ve used in the past or plan to use this upcoming year. <>

MYTH #1: AIM doesn’t really work with the new curriculum.
TRUTH: This is absolutely false. Anyone who says this with full conviction either hasn’t fully grasped the visions, goals and expectations outlined in the new curriculum or they don’t truly understand or use the AIM program, or even both. There are so many overlaps between the expectations of the four strands (Listening, Speaking, Reading, Writing) of the revised curriculum and the principles of AIM. For example, if you look closely at the overall curriculum expectations “Listening to Understand”, “ “Listening to Interact”, “Speaking to Understand” and “Speaking to Understand”, it is evident that these are all core principles of the AIM program — listening and speaking exclusively in French, independent partner-group work, guided and spoken interaction, role-playing, etc.

Myth #2: AIM doesn’t offer any opportunities for covering the cultural expectations in the new curriculum.
TRUTH: The cultural expectations were something I paid close attention to when the revised FSL curriculum was released. I looked at the “Intercultural Understanding” overall expectations for each of the four strands in each grade for Core French and identified its unique geographical scope. Then I researched to see what AIM resources (e.g., plays, readers) could be used as either springboards or the main resources for covering those expectations. I was indeed pleased to see that regardless of the geographical area, I could find at least one AIM resource to cover the cultural expectations. For example, this year, I’m teaching Core French to grade 4, and plan to use the Cultural Literacy Pack, “Mathieu et Cassandra, deux francophones en Ontario”, to cover the expectations for francophones in Ontario, and for grade 7 (Americas outside Canada) last year, I used the AIM readers “Jean-Michel – Acrobate” and “Je m’appelle Christian: Ma vie et mon art”, both set in Haiti.

MYTH #3: The AIM program is just about teaching plays. When are students ever going to need to talk about pigs in real life???
FACT: As an AIM teacher, I’ve come to realize that the high-frequency vocabulary on which the AIM plays (e.g., Les trois petits cochons”) are based can be applied to many real-life situations. Yes, in real life, you might talk about houses, ordinal numbers (first, second, third), action verbs (e.g., running, yelling, climbing, falling), etc. And as I delved deeper into CEFR and looked at various resources (e.g., “The CEFR in Action: Scenarios for an Action-Oriented Classroom” by Geoff Collins and Danielle Hunter), I discovered so many opportunities to develop relevant, authentic, action-oriented tasks based on the AIM plays and readers that I use in the classroom. The key is to identify the theme(s) in the play/reader that you can use as a springboard for an action-oriented task and then develop a relevant scenario for your students that fits the true definition of “an action-oriented task” that ideally covers expectations in many or all of the four strands of the curriculum.
For example, with my grade 5s and grade 6s, we explored the play, “Comment y aller?”, about a girl’s adventures with various modes of transportation, trying to get from Quebec to Paris. It was clear that geography and modes of transportation were key themes in the story. This soon led me to the idea for a culminating task in which students needed to design a map. I proposed the (fake!) scenario that AIM Language Learning is planning to publish a new edition of the play and wants to include a map of Marie’s adventures as an appendix of the play, and AIM is looking for map submissions from students. The map would need to include the learned characteristics of a map (e.g., une légende, les symboles, l’échelle, le rose de vents, les étiquettes, un titre) and a path showing the various stages in her voyage. As part of the “backwards” unit planning approach, I identified the culminating task, then the various pre-tasks that students would need to accomplish that task.
For my grade 7s, I used the AIM readers “Jean Michel – Acrobate” and “Je m’appelle Christian, ma vie et mon art” as springboards to explore the unique and amazing geography and culture of Haiti, as well as the tragic devastation to the island as a result of the earthquake in 2010, and its continued need for reconstruction. From this cultural awareness, I proposed to students an action-oriented task scenario: They had just learned about Haiti’s need for reconstruction, so they, as a class, want to host a yard sale to raise money towards the reconstruction. In order to advertise the sale, they would need to create an online Kijiji ad for household items that would want to sell. They would then need to actually bring in the three items to the classroom and have a mock garage sale, role-playing as both the customer and seller, and using the learned vocabulary for shopping and money, as well as grammatical structures for adjectives.

My journey towards discovering and confirming the alignment of AIM with the guiding principles of the revised FSL curriculum, as well as towards creating a classroom reflective of the CEFR approach of relevant and action-oriented tasks has been a challenging and exciting one. As an AIM teacher, I’ve become not only more self-aware of my teaching practices and professional growth, but I’ve also discovered a renewed passion for AIM and all that it brings to my Core French classrooms. 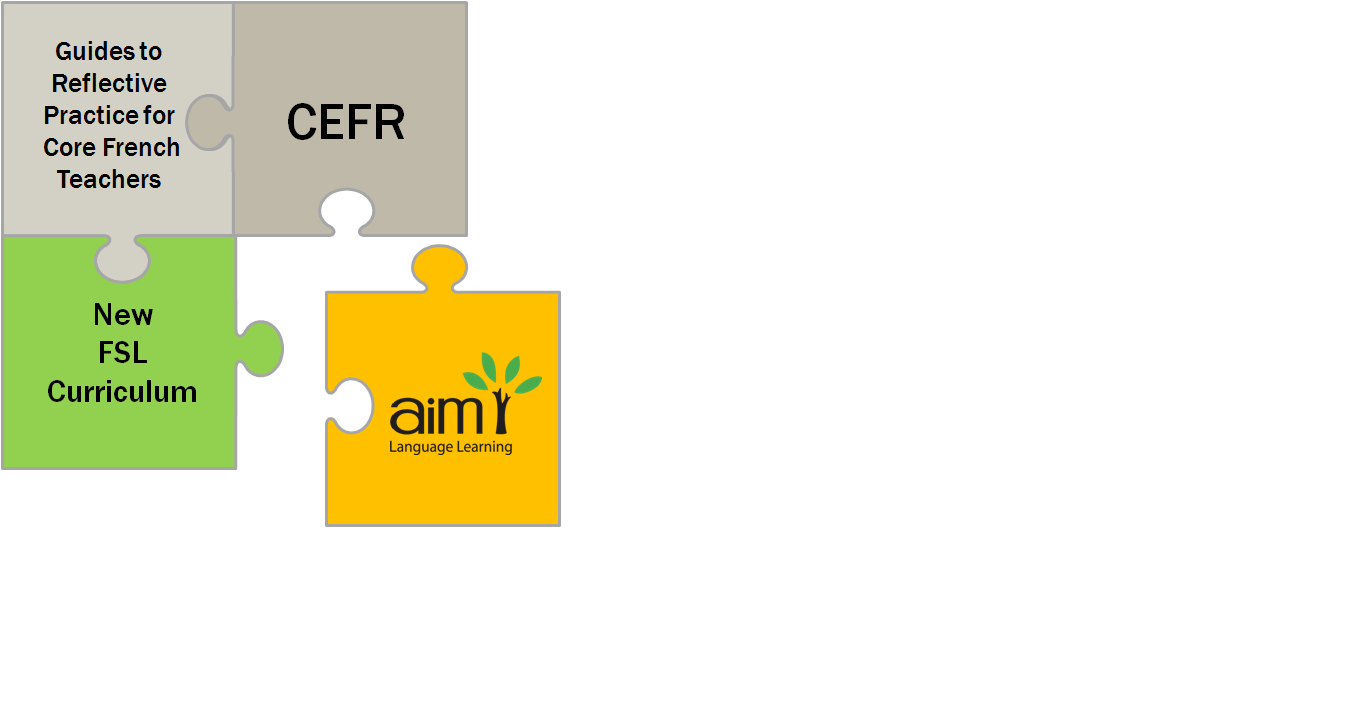